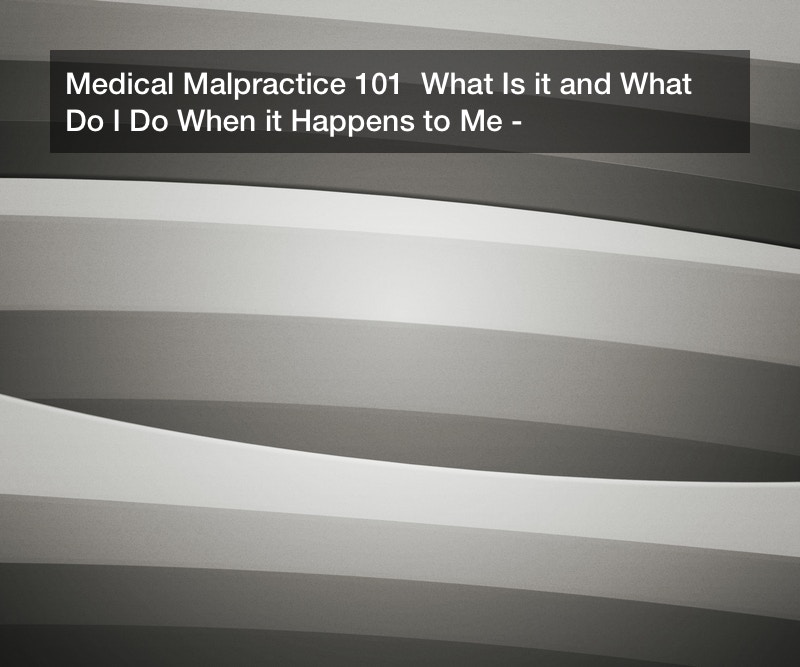 You expect to be taken care of when you receive treatment from medical professionals. When things do not turn out the way you expect, you will wonder if the outcome was the result of ordinary and expected medical risks and side effects or medical malpractice.

Here is some medical malpractice information to help you to navigate this area of the law:

What Is Medical Malpractice?

As a form of negligence, medical malpractice has four elements:

Who Can Commit Medical Malpractice?

Generally speaking, medical malpractice applies to anyone involved in providing medical treatment, regardless of their exact role. One test used to determine if someone should be held to the standards of a medical professional in a medical malpractice lawsuit is whether the person provided medical care or advice, or acted in a role that required the skill and judgment of a medical professional.

As a result, employees and staff that perform work other than medical services would only be liable under ordinary negligence. For example, a custodian, medical biller, receptionist, scheduler, administrator, or medical transcriber probably cannot be sued for errors under a theory of medical malpractice because they do not provide medical services, even when they work for a medical provider.

While it might seem counter-intuitive since a patient must have a terminal condition to enter a hospice care facility, hospices can be liable for medical malpractice according to most sources of medical malpractice information. This can occur in a few ways:

What Acts and Omissions Can Constitute Medical Malpractice?

One of the most important pieces of medical malpractice information is the type of error that rises to the level of malpractice. Generally, any decision or action that fails to meet the standard of reasonable medical care can trigger a medical malpractice lawsuit. Some examples of such actions include:

What if I Do Not Discover the Error Until Later?

Sometimes, medical malpractice information about your case might not come to light until years after treatment. For example, an error in prescribing a drug for eye care might not become apparent for several years as you slowly lose your eyesight.

Even when you are aware of your injury, you might not connect your injury to your treatment until years later. For example, you might have persistent pain in your surgically repaired knee, but might not find out that your pain comes from a sponge left in the knee until you seek a second opinion years later.

Because many patients require expert advice to connect their injuries to an act of medical malpractice, many states have adopted a few mitigating rules to soften the impact of the statute of limitations:

How Do Claims Usually Proceed and How Long Do They Take?

When a patient suffers medical malpractice, the patient will typically seek a lawyer and a second opinion. Both of these consultations are important. The second opinion will provide the medical and scientific basis for determining whether the medical care met the standard of care expected from the medical provider.

In many states, a lawyer must obtain a case review at the time of filing or within a prescribed time period after filing. The purpose of the case review is to eliminate frivolous cases. The case review typically involves a medical review board established under the state’s law.

What Damages Can Be Expected?

Damages from a medical malpractice case typically fall into a few categories:

What if the Patient Dies?

If a patient dies, the case proceeds in substantially the same way. However, in calculating damages, the family’s wrongful death lawyer would submit evidence of the person’s lifetime earning capacity that was lost as a result of their premature death. This would be added to any expenses incurred, such as medical bills and funeral costs.

Who Is Responsible for Paying Damages?

Medical malpractice is rare. However, it can happen anytime, from a simple orthodontic exam to the most complicated surgery. When it does, seek a second opinion and a legal consultation so you can preserve your medical malpractice claim.